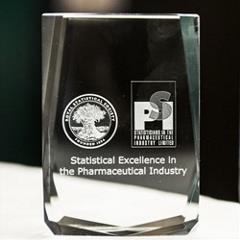 Nominees can be based anywhere in the world and do not need to be a member of PSI or the RSS. The award will be presented at the Annual PSI Conference which will be held in London from May 14th-17th, 2017.

Last year’s winner was Richard Nixon of Novartis, who sadly passed away shortly after receiving the award for his work on ‘Enhancing decision-making in drug development using quantitative approaches’. Previous award winners are Katrina Gore of Pfizer and Nicky Best at GSK (2015), Craig Mallinckrodt of Eli Lilly (2014), Björn Bornkamp of Novartis (2013), Harry Southworth of AstraZeneca (2012), and Phil Woodward of Pfizer (2011).

'Making a nomination is not only a great way of recognising the achievements of the nominee, but it’s also good for enhancing the reputation and benefit of statistics within the pharmaceutical industry,’ commented Tim Rolfe, who is on the board of directors of PSI.

“Statistics plays a vital role in the pharmaceutical industry, and this award helps to recognise all the outstanding work that goes on in it,’ said Hetan Shah, executive director of the Royal Statistical Society.

Nominations can be made until midnight on April 3rd 2017.

Our monthly webinar explores examples of innovative data visualisations relevant to our day to day work. Each month a new dataset is provided from a clinical trial or other relevant example, and participants are invited to submit a graphic that communicates interesting and relevant characteristics of the data.

PSI are starting a book club! We will be reading/discussing non-technical books relevant to our roles. Participants will be split into smaller groups to network with each other and practice exercises.

Whatever your current challenge(s) at work, this workshop will explore what's holding you back, and how barriers can be removed in order to progress and achieve.

Learn from others in the PSI Community who also associate with Imposter Syndrome. They will discuss the topic, give their own personal views and experiences and provide tips to beat it.

R is quickly gaining popularity within the pharmaceutical industry due to it being a very powerful object-orientated language, and is able to produce analyses and high quality graphics. This will be a hands-on interactive course and will utilise the RStudio Cloud development environment.

In just 1 hour, learn about the field of medical statistics and how it plays a crucial role in developing ground-breaking new medicines, vaccines and healthcare products.

Our annual PSI Medical Statistics Careers Event, will be held online on Wednesday 2nd March 2022. The event will include a live online panel discussion and a virtual exhibition session.

For our global team in Europe we are seeking highly qualified candidates to fill the position of Global Director Biostatistics (m/f/x).

Joining us as Principal Biostatistician you will be responsible for providing statistical support of global clinical development programs in neuroscience.

The Senior Manager Biostatistics will be responsible for leading biostatistics strategy and activities for a compound and/or for individual clinical studies.

Novartis is establishing a virtual Analytics Network in the UK and we are currently recruiting PhD graduates to join this exciting new group!